The Evolving Relationship Between Graphic Design And AI

The Evolving Relationship Between Graphic Design And AI

The age of automation has heralded an unprecedented change and there is no denying it. Be it Amazon continuously displaying ads of oven mitts since you purchased a microwave from the platform, or Netflix filling your recommendations list with K-dramas no sooner than you finished watching one- Artificial Intelligence (AI) plays a big role in our lives today, acting as a behind-the-scenes processor that sifts through heaps of data to identify a pattern and then deliver personalized results around the same.

While AI has transformed computers into smart decision-makers, has it also blessed them with creative talents? – that seems to be the raging question in the design industry. Graphic design has always been welcoming of new technologies in its operational purview, and AI possesses the potential of catalyzing a paradigm shift in the sector.

AI in Graphic Design- The new age of creativity and technology

Though the implementation of AI in design is still in its early stages, the scope of it is already impressive. Keeping aside the creative projects, a designer also has mundane jobs on his task list that can be easily automated, and that is where AI comes into the picture. Many design studios, for instance, are known for using an AI-powered software that generates web designs based on a scanned rough sketch, and the library of established UI components in the system renders a prototype in alignment with the company’s design briefs that can be inputted manually.

Others include provisions for applying algorithms to any set of parameters, following which the AI-powered tool produces numerous iterations of one design in a short span of time. Such use of AI in design is definitely transformative as it actually produces art based on prompts. It also gives designers the gift of time, enabling them to experiment with more creative ideas while the software does the grunt work. Similarly, text-to-art AIs has made life easier for creatives who lack the expertise of sketching their ideas, by enabling them to generate designs through prompt phrases.

Airbnb is already using machine learning and computer-vision enabled AI for generating design components with production-ready cone from handmade wireframe drawings. Netflix has put AI in charge of personalization and localization of their graphics- augmented intelligence systems ‘read’ the master version and translate it into the different languages of the diverse audience without tampering with the rest of the design. An AI algorithm has also been used to create seven million unique versions of Nutella’s graphic identity for packaging use in the Italy market, with the system independently picking patterns and colors from the brand’s existing database.

Thus, it is safe to say that the role of AI in graphic design has expanded beyond just producing mock-ups. As AI constantly evolves to better create original art, its scope and role in the sector is also broadening. In the near future, designers can very well be expected to act more as curators, providing high-level directions to their AI partners in the form of structured algorithms in service to their own creative work. AI can also be leveraged to enhance the design work of humans- this can be achieved by enabling them to suggest incremental improvements in design, based on a profound understanding of the inspirations and influences of the original one, as well as the power to A/B test ad nauseam.

AI in Graphic Design- A part of a bigger picture

Despite the advancements that AI has ushered in the design industry, it does well to note that it only automates a relatively small part of the long-drawn process of building a design from scratch. A typical creative process usually begins with a brief, with the client laying out the image in their head- a preliminary ‘prompt’ that may or may not bear resemblance to the final design that the clients ultimately decide upon.

Following the brief is an analysis of the brand’s competition, and the ideation of the format of designs that needs to be put out to appeal to the target audience. It then moves through mood and inspiration boards to produce a range of sketches in the visual brainstorming process. Once the best ideas are developed and shortlisted, the designs are reworked repeatedly from feedback, and all concepts and mockups are polished to perfection, with the power of a human touch.

As established, there is still a number of steps in the designing process that AI cannot yet execute effectively. Though its current role in design feels like a positive force, the possibility of ‘artificial’ art leading tastemakers back towards the ‘real’, somewhere down the line, is open. AI-driven design is limited by its input, and based on the fact that they often draw inspiration from existing sources, their ownership becomes a matter of dispute, raising concerns around plagiarism as well as the licensing of the designs across different platforms and marketing channels.

AI may not be an all-encompassing solution to the creative labor that the art of graphic design necessitates, but it can very well be used to free designers from the rote, tedious tasks involved in the process. As for the fear of robots replacing designers for good- well, that is not happening anytime in the near future. But then again, never say never.

For now, you can leave all design related tasks to the expertise of a competent graphic design agency. Digital Polo houses a team of talented designers who use the best blend of creativity and technology to create 100% original and unique designs. Contact us for a timely supply of unlimited designs for a fixed, monthly fee. 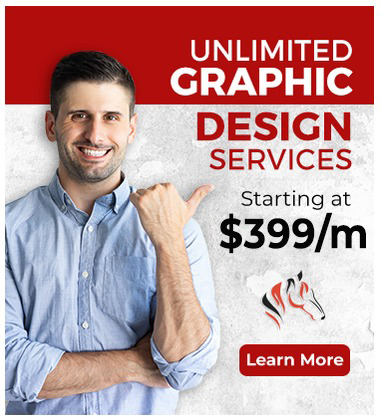